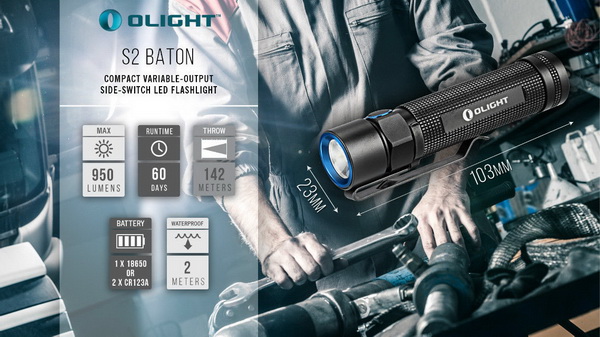 After the tremendous success of the Olight S1, the company felt it was time to provide the same ‘small form factor’ in a package that produced a high lumen output using an 18650 battery. As such, the S2 Baton was born. The S2 Baton (S2) is a side switch LED flashlight powered by a single 18650 battery or two CR123A/RCR123A batteries. Donning the signature black stainless-steel bezel and switch ring with a blue rimmed face, the light houses a high performance Cree XM-L2 LED which is able to deliver a max output of 950 lumens. Needless to say, it is ready to put in some work!

Whats in the Box:

Like other current Olight offerings, the S2 Baton comes in a very sturdy clear plastic hanger package. The front of the box is mostly clear and shows off the light, along with a few bits of important info. The back contains all the details you’d expect to find printed there along with some contact info. Inside you find all the bits tightly packed away. Inside you can find the following: 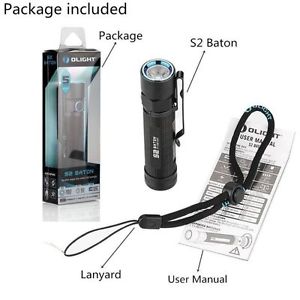 My thoughts are as follows:

What I Like About It: For starters, the price is fantastic – you get a fantastic light, wrist strap and user manual for less than $50. I really like how Olight was able to pack so much into a package no more than 4 inches in length, weighing less than 2 ounces, with a removable scratch-resistant deep carry pocket clip. It’s IPX8 waterproof and impact resistant, has a no roll design, and a TIR reflector which provides what I can only describe as a balanced flood of light akin to a full hotspot. The S2 also has a sturdy ‘hands-free’ magnetic tail cap that secures itself to metal objects, something my father (a mechanic) would have truly appreciated when working under the hood of his car. While most lights have a concentrated hot spot with gradient flood of light escaping the center, Olight’s reflector has managed to uniformly balance the beam to increase the overall light, resulting in almost no flood whatsoever. This results in a great light for up close and medium-range illumination. Speaking of illumination, The S2 has six different light settings depending on the batteries used: 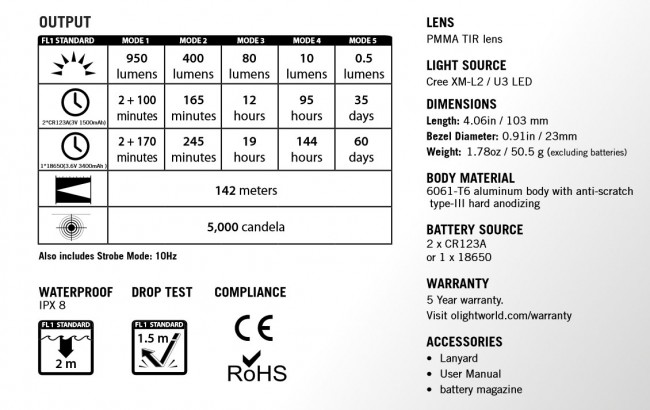 For size comparison, I placed it next to my Silvertech Victorinox Spartan, another EDC must-have… 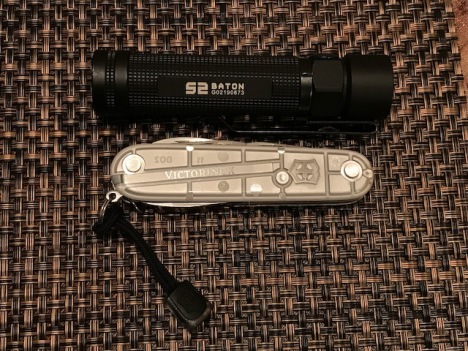 By the way, I wasn’t kidding about the magnetic tail cap… 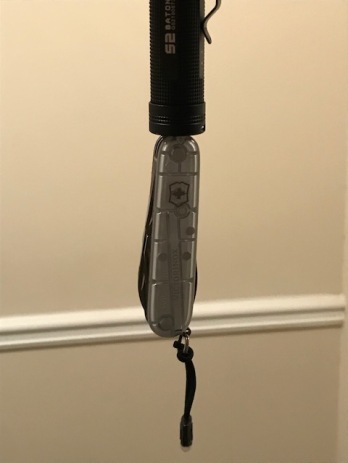 What I Don’t Like About It: I would have liked for the package to include a battery or charger, which sadly, it has neither included. There are some other small details that are missing from this light, but were addressed in the S2R version, like being able to charge the flashlight without removing the batteries. Of course, you have to shell out another $23 for the upgraded S2R model, which is also a fantastic flashlight. I’m also leery about pure side-switch flashlights in bags, as it is very easy to operate and deplete the battery unknowingly. The last thing you need is a flashlight that won’t work because it was set off in your bag when the button made contact with a hard surface. Olight has worked on this over time but I can already recall one incident where I looked down after a short drive and found the flashlight was on while clipped inside my jeans pocket. 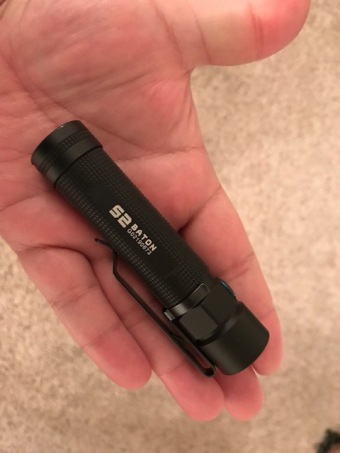 Final Thoughts: This is, in my opinion, one of the best flashlight EDC options out there – period. And those are big words, considering the competition and amount of models companies are pumping out to flood the EDC flashlight market. Grab yourself a few high capacity 18650’s and a reliable charger, and you will likely not be able to top this kind of value in a flashlight. It’s light enough to disappear in the pocket, and doesn’t bring your baseball cap down if you clip it on for hands-free use. The S2 and upgraded S2R can be found at Amazon here: http://amzn.to/2EOjMvM 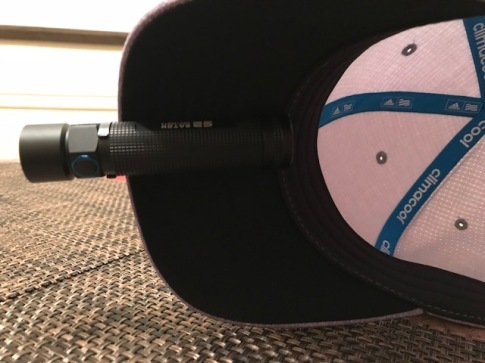